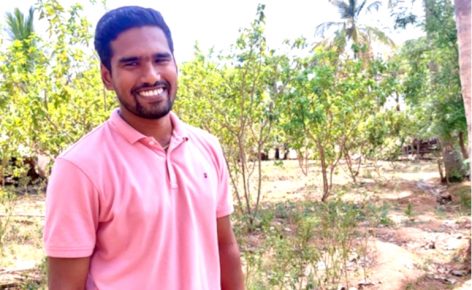 I come from a small hamlet in a village called Bommahalli in Dharmapuri district of Tamil Nadu. My village is so far away from everything that it used to take me almost 45 minutes to reach my school! I used to cycle to the bus stop and take a bus to reach the government school I studied in. Even though both my parents are not very educated, they pushed me to study as much as I could. So much so that in class VII, they enrolled me in a hostel near the school so I wouldn’t have to travel so much. It must have been very difficult for them but their sacrifices paid off. I topped the school in class X, and got a scholarship to a private school, which paved the way for me to join an engineering college. I was the first college graduate in my family! It is because of the sacrifices my parents made and the support my sister gave that I am where I am!

Because of engineering, I came to the city for the first time. It was such a culture shock for me! In the village, an encounter with a policeman or even a small government officer is fraught with fear and uncertainty. Some of them behave like feudal lords, and even the simplest of functions they perform were seen as charity. I was shocked to see that the citizen was the lord in the town. They were so assertive and demanding of their rights. Similarly, opportunities available to people in a village and those in towns were very different. That was when I truly realised that there were truly two India’s.

That stark contrast stayed with me. Even though I got a good job in a multinational company, I couldn’t shake the feeling that I had to do something. I knew I had to provide for my family and that I had a responsibility to repay all they had done for me. But how could I have been at peace if I wasn’t doing something to level the playing field? How could I ever be happy if I wasn’t trying to do something for the thousands of villages which were just like Bommahalli?